At My Place: What a Surprise in the Mail! Look't This!

It was just about noon last Thursday (21st) when the doorbell rang. When I opened the outer porch door, the mailman was just putting a box down my step, and he was already hurrying back to his truck. I yelled, "Thank you," after him.

Then I picked up the box and brought it inside. I was not expecting any order; from who could this be? Finally I found a little blue note beside the area where my name and address were. It had the name, Linda Kroeker there, with her address in Calgary.

I know Linda as the young widow of my cousin Robert Kroeker who died a few years ago while in surgery to repair a torn aorta. She was a missionary in Portugal as a single gal. Robert became aware of her because of her missionary photo on the fridge at his brother Ken's house. She was a friend of Ken's wife, Carol. She saw Robert looking at the prayer card, and encouraged him to write to Linda. He did. Romance blossomed and they married.

She has been a Kindergarten teacher at a private Christian Academy in Calgary ever since she married Robert. (I should look up the year).

So I cut open this box, wondering what Linda had sent me. I pulled out a clear plastic bag and in it was this beautiful hand-made quilt! There was also a card in which was a note that said basically, that she had been impressed by the joyful spirit in my Christmas letter, and wanted to bless and encourage me. Wow! (I had to go read my Christmas letter again to see if I could see what she saw :)) 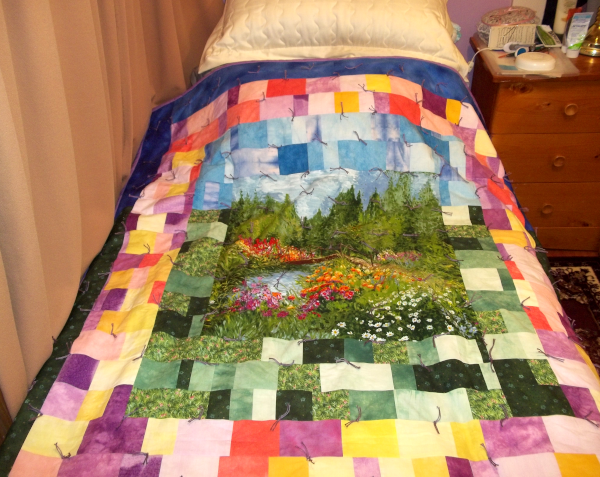 I took a photo of it on my bed on Sunday evening, but the light seems to be quite yellow there. So I took another photo this morning with it spread out on my recliner. 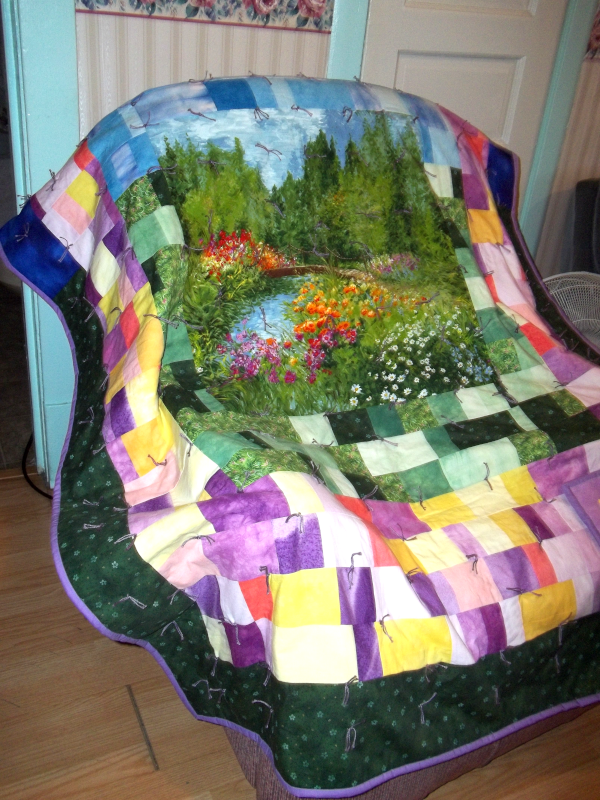 When I emailed Linda to thank her, she replied that she hoped it would be useful when I wanted to curl up to read books.

Well...I do all my business reading at the computer, and I read personal mail and printed newsletters, magazines, etc., in the bathroom. (Good thing I don't have to share it, eh?) However, because I have such long days, from 6 am to 1am I often find myself zoning out in the afternoons so I've taken to allowing myself short naps in the recliner. (There's no one here to laugh at me for that).

So I tried a nap on Saturday with this new quilt - but then I slept for 3 hours! I think I better be careful about how often I do that. However, I will definitely keep it handy. Just to stare at that lovely scene in the middle and to enjoy it for naps - sometimes.