My First Ever Easter Lily!

Last week the dear and gracious leaders of our ESL class in our church, came by again - (they do this fairly frequently) with gifts. They brought me a plate of Chinese food that that lasted me for 3 meals, plus a bag of 4 loaves of brown multigrain bread, and then they handed me a potted lily which they said was from the church. (At Christmas it was a pointsetta). 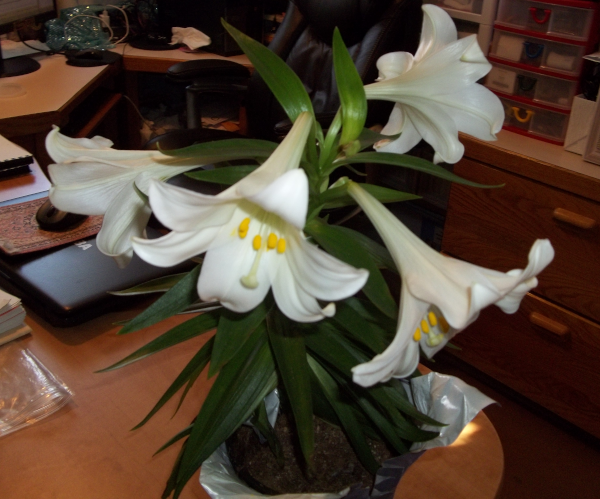 It was the very first time I've ever been given an Easter lily, and though the flowers were not quite open yet, I was delighted. I set it up on the shelf at my east window so it would get sunlight.

By Good Friday at least 3-4 lilies had opened up! I did't get around to taking photos though until yesterday, and then I had to pinch out a couple of lilies that were turning brown.

When my neighbour Rita popped by for a minute, she spied the lily plant right away. She wondered if I would be able to plant it outside for the summer. I had no idea, but I went to check online and discovered that yes, it is possible to plant it outside as it is a prennial, and it will bloom again - but I think that will only be in more temperate zones - like further south. However, I'm willing to try it! (As a potted plant it will only bloom once). 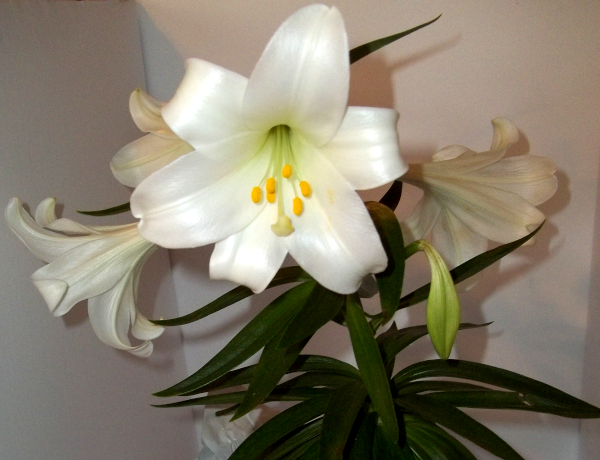 I trust you were blessed in some way over Easter too. Even if it was only that you got a fresh thrill from the awesome, tremendous gifts God gave us at the first Easter; salvation, eternal life (through Jesus' resurrection from the dead), and then a little later - the gift of His HOLY SPIRIT - who is like Jesus in residence in us!