The Mouse War is as Good as WON!

Yes, I'll share a few photos. I took more, but it is hard to see the detail in most of them. Peter spent last Monday and then Tuesday morning getting the gaps closed to the "Hill of Dirt" under the front third of my house. It became obvious that it was much smarter to close these gaps off than to try to wrap the whole foundation.

But before they were done, Mitch came and checked out the south wall, where I said I had felt drafts in the winter. He found a long crack there that needed to be filled in. But they needed me to clear the work area there so they could get at it.

I did that this last Saturday. Shifting a lot of things away from that wall. Yesterday, Mitch arrived. Peter came too, but went on to another work site, so Mitch did the filling in here. He was done before 12 noon. He hasn't sent his bill yet, but it should arrive by email today.

True. It will cost more than I'd expected, but workmen are worthy of their hire if they do such neat and thorough work!

I feel quite confident that this winter will be different. It is possible that a few mice got in and have been hiding through all this noise and work, but I will set out traps and hopefully catch them before they breed and multiply.

The quarter-inch wire mesh closing off the openings behind the furnace. 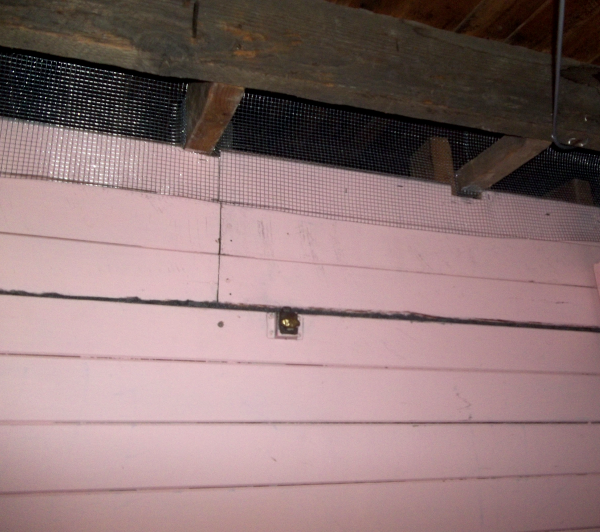 The same area, just more to the right. Here Peter wrapped the mesh around the corner and behind some furnace pipes. Those were cramped quarters to work in!

Ah, this was the bigger challenge. The opening in the wall to the Hill of Dirt, started at waist-level and went to the top. Gary had put some sheets of panelling here, but not enough to keep any mice out. They could march in as armies!

However, Peter carefully cut and bent and applied the mesh around each of the furnace pipes and all the way to the bottom of that gap, before putting the panelling back in place.