Introducing You to My New Computer

I did hint last week that I'd be absorbed in transitioning to my new (to me) computer, didn't I? (I'll insert a few photos to show you what I had to work with).

Well, after lunch last Tuesday I decided that I could not wait until the weekend. I would start with the transition work right away. Which meant that first of all I had make sure I had backed up everything on that old hard drive, and also the emails, which had to be saved individually as plain text files.

The next morning, (Wed.) I was ready to start the installation of my favorite system on the new computer. I took a look first at the Windows 10 Pro that was installed there, but wanted me to sign up for this Microsoft account and that things... and I decided I wasn't that sure I needed Windows. However, since there was so much room left to spare on the 1 TB hard drive, I decided to leave it alone for the time being, and install LEAP 15.2 (That's by OpenSUSE).

It didn't even take that long. But when I logged in, I found it complaining it didn't have enough room for the extra favourite programs that I wanted to add. I checked the partitions and found that the installation had only given itself very small partitions. I couldn't even add all my backed up files from the backup drive. There was nearly 900 GB of space left unallocated! What?

I decided that before I got too settled in there it would be better to use a G-Parted disk to create larger partitions for LEAP, which meant wiping off the installation I had just done and then doing it over. There was some fuss when the LEAP disk would not accept or use the partitions I had created. I tried this and that, and did some research on the laptop. -- Ah-ha! the partitions I had created needed to be mounted for the file times that I expected to be installed there. Okay, I tried again, and this time I got that step taken care of and when I went back to try the installation again, Voila! It all worked as I expected it to! 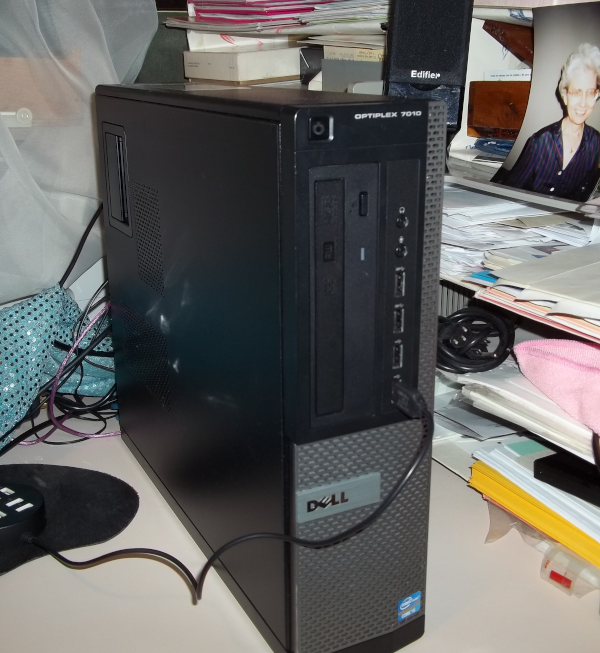 But by that time it was supper time. I spent the evening loading my backup files (about 255 GB worth!) installing my favourite programs and fine-tuning the look n feel of the computer the way I like it best.

Thursday I spent most of the day in setting up my emails, each one manually, and as IMAP, which seems to be the only way KMail wants to allow it now. (I learned that on the old computer). By the evening I was setting up about 17 more emails that I usually only check once a week in the Thunderbird program. There were a few more to do on Friday, but then that was all finished.

Friday was a more normal day, but in the evening I wanted to download the income tax forms from the CRA website, and print out a set for me to do the first draft of my report. That's when I ran into problems with the printer needing to be set up. I fussed and struggled with that for the rest of the evening. Hours down the drain! But I've had this HP Color Laserjet since 2015 and it has worked fine before throughout the past 6 years - why would it not install the print drivers now?

I finally decided to give up and pray hard about that on Saturday morning. Which I did. Then it was Sunday before I tried to set up the printer again, and this time - Easy-Peasy! All done in a couple of minutes! So what did I do wrong on Friday night? No idea! (Maybe it just needed to be turned off then on again first?) Both of them are standing side by side in the upright position, in case I need to go back to the old system for something, but eventually the bigger one will be the only one standing in that spot.

I did have to switch back to the old computer on Saturday night, to get some login info and my bookmarks from Firefox. Other than that, I'm up and running on the new (to me) Dell computer! It runs in almost perfect silence, and is quick and nimble in everything I want to do.